Milestones. History of the AWG projects and premiers. 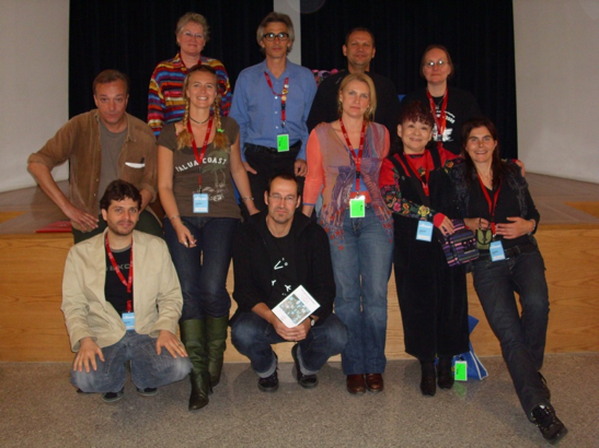 AWG  Project 2006/2007 “The Sound of Animation” part II
The world premiere of AWG  Project 2006/2007 "The Sound of Animation" was held successfully on November 10th, at 11:30, as one of the official programs of Cinanina 2007. The AWG Members who attending Cinanima, also a large audience of 200 people from children to adult, attended the screening.
The festival offered to AWG group an A4 advertising page in the festival’s official catalogue for our project and they also paid to the project, an extended tribute in the festival’s magazine (page10-12).

2008  “Olympics, Let’s Fantasies!”
At Hiroshima was a great success, and the presentation was very positive. We were thrilled to be part of the festival, and to have the student work screened in such a professional venue. Thanks to the Hiroshima International Animation Festival for hosting AWG again this year! It was wonderful to see the AWG members again, and to enjoy the festival.
Bradford Animation Festival  November. David Bunting introducing the programme.

2009-2010 ‘Happy Anniversary’
The world premiere on 8 June at Annecy 2010, at Salle Pierre Lamy at 18:00 and an open air projection at Square de l'Évêché  An asian premiere took place at the Hiroshima 2010 Animation Festival,10t August at 09:00 in the Medium hall, with a large audience attending the screening.Semptember of 2010 the Greek audience  greeteed  the sceening  with great entousiam during  the animasyros03 festival.

2011 ‘Red Dot’
Salle Pierre Lamy at the recent Annecy Festival, 9th June 2012.
The screening of the Red Dot at the Hiroshima Festival was successfully attempted by lots of visitors.
Semptember of 2012  the Greek audience  greeted  the red dot compilation  with great entousiam during  the animasyros05 festival.
2012 ‘Animated Memories’The world premiere of the project was scheduled during the Monstra festival  on March 2013, Lisbon, Portugal.
July 2013, the Cyprian audience  greeted  the sceening  with great entousiam during  the 1st animation  festival in Cuprus, Animafest, as well the Greek audience on  September during animasyros06.

‘Colours’
The Asian premier scheduled during the Hiroshima Festival on 24th  August 2014.

2016 My favour tree
The project is an homage to Nicole Salomon, the mother of AWG, who has long been dedicating all her time, energy and money for the development of animation art field internationally, and especially for activating AWG ceaselessly.

For this aim, Nicole proposed the theme’ My favor tree’
Ans Sayoko Kinoshita  coordinate the Project, such as collecting films and do the editing in Tokyo.

During HIROSHIMA 2016 hold in August, the premiere of this projectas well the European premiere will be at Cinanima festival next November 11th

2015-2016 ‘Metamorphoses
A characteristic of animation that we find very often in narrative is that of metamorphosis; transformation in animation achieves the greatest degree of continuity in the economy of narrative and adds another dimension to the visual style of the animation film.

The artists try to show indirectly by a continuum of acts that take place in space and time, in order to mimic conditions. The narrative unfolds through conflicts; there is always a cause and an effect.
The children tried to understand metamorphoses as a narrative tool that   gives a lot of ideas and opportunities to express themselves with various techniques through new ways.
The results were presented are  impressive, the children expressed by various techniques  and means.
The project coordinated by Anastasia Dimitra and the world premiere has scheduled on Easter 2017 during Animation Central, part of Leeds Young Film Festival in the UK

2014 Optical Toys
We use quite often some optical toys (thaumatropes, phenakistiscopes, zoetropes and flipbooks) as "starters" when doing animation workshops. It is an easy way to introduce kids on the animation concepts, but most of the times these animations, are not taken "seriously" and have no further development.
So, this project  was  a challenge for us to find ways to include any optical toy on the animation process and create films out of a chosen Optical Toy.
The compilation of the project  coordinated by Anastasia Dimitra, who edited  all the nine submissions together, and made DVD copies for the participants.
The world premiere took place at animasyros 08 festival at Apollo theatre on Friday 18:30, 25th of September,  2015, the young audience were very enthusiastic.


2013  ‘Colours’
The concept is the children to express their ideas in a single color and the tonalities. In some  cases the experiment is successful, in  others not, but the effect does not cease to be very interesting

Each participant focus on ONE chosen colour during the animation procedure
The theme approached in different ways and used various techniques. The purpose was the viewer connects each film with a colour. 10 studios participated and they have chosen various animation techniques to realize their ideas. Christel Degros, coordinated the project
The world premiere of the Animation Workshop Group project for 2013 ‘Colours’ presented during the Vafi festival  on April 2014. The Asian premier scheduled during the Hiroshima Festival on 24th  August 2014.


2012 ''Animated Memories'', 30'
The idea of this project is to promote inside each country and around the world with different groups of children and adolescents the artists and their artworks. Each workshop, have chosen one or several national artists and their artworks. The children tried to know the maximum about them. and approach their work. The inspiring artwork of the artists that are used to the projects mentioned in the beginning or in the end of each  animated video.

Each group  wrote  a story, a situation, invent movements, transformations that came from the studies, that are inspired,  from the artists. Each video duration is around 2 minutes, and are used several animation techniques.
The project was coordinated by Fernando Garlito (Portugal), who also managed the final compilation of the film.


2011 ‘Red Dot’ 30’
AWG Project 2011 is a simple mark in a certain place of the frame for an example, a red dot as a starting point to begin and end the story. This idea allows all ages to work on the project and would also allow all mediums (clay, cutout, drawing etc) to be used as long as the object starts and ends in the same place.
The final compilation coordinated by Christel Degros (Belgium), who edited all the submissions together, and made DVD copies for the participants.

2009-2010 ‘Happy Anniversary’ Project
Actually, it’s a ‘free theme – free topic’ project, where the children first learn about ASIFA history and goals—that ASIFA started as a way to communicate between the East and the West, and expanded as an idea that animation people join together as a family—and about animation as an art form and a way to connect people across the borders.  The children learn that through animation we try to teach peace—we consider that if we have a freedom of expression we have a peaceful world. Another theme given to the young creators is the question how do we celebrate the year 50? How do the children celebrate ASIFA’s birthday?  Finally, the last flame of inspiration was the question, where will the world be in 50 years from now?  However, the children could animate whatever they want.

The AWG Project 2009-2010 resulted as follows: Firstly Raoul Servais, our former ASIFA president, created the opening credits. Then the project was divided into two parts: the first part was an online project, a ‘collaborative animation segment’ coordinated by Ed Desroches (ASIFA-Colorado) among all the groups for this project, which introduces the idea of ASIFA and the 50th year celebration. Then, following were the AWG workshop films.

Different topics were approached, according to the inspiration and imagination of the children, and the cultural signature of each country clearly stands out in their work. This project involved 14 countries and over 200 children creating animation inspired by ASIFA. The project was coordinated by Sayoko Kinoshita (ASIFA-Japan), who also managed the final compilation of the film.

​2008 “Olympics, Let’s Fantasies!”
“Olympics, Let’s Fantasies!” is a rather open theme: this time we asked children to express their fantasies, ideas and messages on the Olympic Games or anything related to the games, freely within about 2 minutes. Different topics could be approached, according the fantasies and imagination of the children. It is expected, that the characteristic of children and cultural tendencies of each country today can be shown in their work.
The final compilation of the films was under the responsibility of Vicky Wu (Taiwan), who edited the entire project works together and duplicated DVD for participants to share.

Normand Roger wrote 30 minutes music. The main music for the workshop films compilation is 26 minutes; Normand Roger  cut off into sections the music, each workshop animated based on a music section. Then edited  the whole material.
We will respect Normand Roger’s music composition and we kept the initial order of the original piece.
​
"Animation by Children of the World --- with Normand Roger".
is a theme very open: this time we asked children to express their ideas, their messages freely within approximately 2 minutes based on the music piece. Different topics approached, according the inspiration and imagination of the children. The characteristic of children of each country today came out in their work.
The final compilation of the films be managed by The  University of the Aegean Greece, under the coordination  of Anastasia Dimitra (ASIFA–Greece), who transfered submissions to Betacam SP (PAL), created an opening and closing titles to present program, edit the entire program together and duplicate VHS tapes for participants.
AUGUST 2006
HIROSHIMA FESTIVAL
- Premiere Screening: 12th Int’l Project “The Sound of Animation” – original soundtrack created by Normand Roger
- AWG Meeting
AWG,  Anastasia Dimitra
Anastasia Dimitra: AWG President
13 workshops from 11 countries

AUGUST, 1982
OTTAWA FESTIVAL
The ASIFA Board agrees that Workshops shall be permitted to use the ASIFA emblem.

JUNE, 1982
ZAGREB FESTIVAL
At ASIFA General Assembly, a Workshop Committee is officially included in ASIFA activities. It joins the Education Committee. Inni-Karine Melbye becomes the chairperson of the Workshop side.
​
JUNE, 1981
ANNECY FESTIVAL
Open Screenings of films made by kids. A few workshop leaders meet.